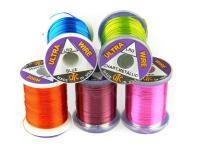 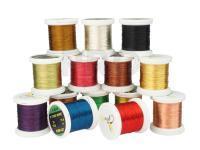 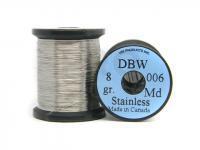 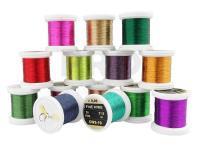 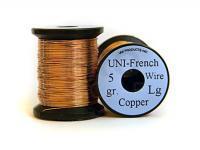 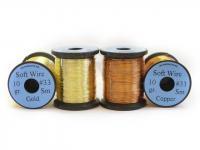 Copper Wire is a perfect for ribbing grayling bugs, Pheasant Tail Nymphs and other nymphs.
Veniard

Since 1923 we have been supplying top quality fly tying materials to the world.
It all started in the early 1920’s when Mr Ernest and Frank Veniard started collecting feathers from London poultry markets for hat mounts and brooches. This in turn led to limited supplies for fly tyers. By the mid 1930’s The Veniard brothers produced there first fly Tying Catalogue. By the start of WWII the company already had a reputation for supplying top quality materials.
The late 40’s saw a big rise in the leisure industry this coupled with public access to trout fishing led to a boom period for the company. This lead to a shortage of home grown materials and forced the company to look overseas for supplies.
The 50’s 60’s saw the company continue to grow with weekly visits to the Fly tying factories of the midlands the norm.
There have been major changes since then with the arrival of synthetics, genetic hackles and specially designed tools. But through all this Veniard’s have and still remain one of the top fly tying suppliers in the world.
All products Veniard

Recent comments
You have to log in to add an opinion

Login
Main menu
Choose from 61612 items available on the online fishing shop!
Other series of this brand